I started to show an interest in woodworking in high school. I took more classes in woodshop than I could get credits for. When I was 16, my parents were building a house and were using a local cabinetry shop they knew. My mom asked if they were hiring and they were. At that point, I had a job without really wanting one. I worked there for 2 years. Then, I framed a couple houses for a few months. I stopped at Behnke Woodworking to say hi to one of my old co-workers from the other cabinet shop. He told me to fill out a job application. I told him that I wasn’t looking for a job and that I was on a college waiting list to go to be an electrician. He still insisted I fill out an application. I told him again that I wasn’t looking. He said, “just do it anyway.” I said, “ok.” A couple days later he called to say I was hired, and I accepted with reluctance.

I started with Behnke in 2002 with a goal of learning as much as I could in two years with the intent of branching out to start my own business. In 2004, my old co-worker left, and I became the manager. At this point, I was able to help lead the company in the direction that Mel Behnke and I wanted it to go. It’s great when two people have the same vision for something. Together we developed and grew the business to where it was in Sept. 2013. On Sept. 4th,, 2013, I purchased the business from Mel, who was awaiting his much deserved retirement with his wife. Since then, I have strived to keep Behnke Woodworking up to the standards the community has come to expect.

I am married with three sons and have a home in Cannon Falls, MN. I enjoy hunting, sports, and anything with a motor including 4 wheeling, snowmobiling, and my garden tractors. My sons love 4 wheeler and tractor rides too.

Wishing for Your Dream Kitchen?

Contact us today to set up a design consultation. 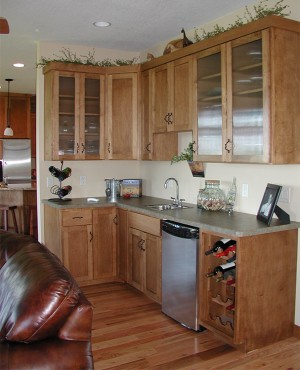